I have 1 (One,Singular) conference speaking appearance for this year, and I am there now. I took the Amtrak Pere Marquette down from Grand Rapids, to Chicago Union Station this morning.

I arrived at the conference hotel, the Palmer House, now a Hilton property, it is one of the grand, old hotels of Chicago.The venue is absolutely lovely.One of the grand, ornate buildings that now seem too much effort for so many people. Alas for these times. (I'll be adding pictures later, maybe, I promise, sort of.) 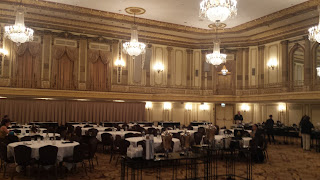 Many years at conferences, I would spend massive amounts of time typing frantically and trying to live blog the conference as I experience it. I started doing that mostly as a service to myself - I wanted to take notes, in depth, and found I could do so as a blog post, and publish my thoughts/perceptions, in an attempt to share them.

A few speakers over the years have been a tad annoyed at my comments. A smaller number have been downright upset. My reaction? If the harsh words in the blog seemed unfair, oh well.

This time, this conference, I'm going to try a difference approach. I'll look for trends in conversations and sessions and see if I can make sense of them, and possibly find some lessons to be considered.

The first few days of the week, there were classes going. Today is tutorial day, the conference itself starts tomorrow. I'm speaking in the first speaker slot after the opening keynote, then scurrying over to the "Mentoring Corner" to talk with new speakers, or potential speakers and help them with whatever I can help them with.

That will consume a large portion of Wednesday, day 1 of the conference. Thursday, I need to leave early to deal with "day job" stuff so I will miss the closing keynote, These things contributed to my "don't live blog" decision. It also helped me to decide to focus on sessions with ideas I could bring back to colleagues and ideas that might be applied more broadly than considered.

And so, we begin.

Today was a low-key day, this far. Nice relaxing train ride in, connected to some meetings with the then employer (MI-GSO|Pcubed) and the client. Did a little paperwork, hung out and just rather rested. Fish & chips and a glass of local beer for lunch from one of the establishments in the hotel. Pretty good fish - haddock, nicely fried. Beer was a local whitsun ale. Not that you need to know that. Really boss, I got the Non-Alcohol version! (I wonder if she'll believe me...)

Ran through my presentation a couple times. Each time I do it, I feel more comfortable - and I like how it has shaped up.

Took a wee nap, followed by a shower (amazing how those wake you up when tired.)

Then hung out and met friends and colleagues as they rolled in, either arriving or from the tutorial they were presenting or in. Now, I'm sitting waiting for the "Pre-Conference Keynote" to wrap the end of the tutorial day, and get people ready for the social events this evening.

Jose Diaz is on the stage, looking pretty much ready to dive in.

This session is "Real Life is Not an Edge Case," presented by Rachel Kibler (@racheljoi) who is one of the SpeakEasy speakers! SpeakEasy helps new or inexperienced speakers find their voice.

==
The message from Rachel last night was a good one for many people to consider, and remember. In short, when we look at the simple, straightforward path. Unfortunately we miss loads of opportunities to examine paths that will happen in real life, for the people using the software.

Our biases, and the biases of designers and people building the application and systems will impact how the software works, and may not be relevant to a large portion of people using it. THese things can be variations on bias-driven cores. They can also be under levels of stress we have not anticipated.

Perhaps, that is the single point - Stress testing of the application is one thing. Testing the application as a person who is UNDER stress is another. We need to be able to recognize the limitations we are putting on people having really bad days (not just a collection of things that get us down) - ambulances, sirens, police officers, hospitals, all count as "really bad days." How easy is our software to use? What messages are we sending to someone, based on the biased algorithm generating the UI/interactions?
==
Speaker dinner w)as amazing. I got to sit with and visit with people I won't be able to hear speak - Bonnie Aumann (@bonniea) and later, JennyBramble (@jennydoesthings) and great conversation with Ray Arell (@elmoray).

Lean coffee this morning, and now an interesting keynote by Janet Gregory and Susan Bligh.

More later...
==
Interesting mix of experiences this morning. Energy between the keynote this morning and my talk was very similar. I spent the balance of the morning, and early afternoon, at the Mentoring Corner, aimed at helping people who would be speakers at tech conferences home their presentation, or, in one exciting case, "I decided I could speak at a conference after coming here..."

Lunch was wonderful. Fajitas and conversation with Susan Bligh and others. Which made me late for Ash Coleman's keynote. Oops.

Context is Everything - Except "context" shifts in ways that most folks, including "testers" don't really expect, anticipate, or consider - like, intent of the customer/user, or possible underlying complexities that are based on life experiences of the developers, designers, testers and customers.

We must "go beyond the context of the expected tester, and lean more into the context of oneself."
--
updated
--
OK, Folks caught main points of Ash's talk on twitter pretty well. (Here, I made a link thing for you: https://twitter.com/search?f=tweets&vertical=default&q=%20%40AshColeman30%20%23AgileTDUSA&src=typd )

What struck me as significant was how context, perspective, life story, experience all shift by person. What seems obvious to one is earth-shattering revelation to another, and that is OK. Being aware that this MIGHT be happening can help us communicate.

An interesting and busy afternoon. I spent a pile of time, like, most of the afternoon, talking with people and looking at what they were doing and what they want to do.

And mayhem is about to commence in the closing keynote for the day - "Bad-Gile: The Game Show"

Mayhem was loads of fun, and provided valuable lessons for those who paid attention. In short, admitting and "owning" errors, mistakes and failures is hard. Recognizing that Agile practices will rarely (never say never) be identical to itself - no two projects, efforts of sets of work will look the same. Do not try and MAKE them look the same.

The evening reception and party were a great deal of fun. People in various forms of 1920's costumes, from flappers to competing Babe Ruths. The ball player not the candy bar named for the ball player.

Loads of good conversations, "networking" and generally hanging with friends, some new, some we've known for time.

Thursday morning, for me was a quick breakfast followed by Lean Coffee. Lean Coffee was interesting - great conversations around important ideas - books, learning, continuing learning after a conference.

That was an immensely intense presentation. Difficult to deliver, difficult for some in the room (I suspect) to hear, yet very needed. There are trends here in the messages from several speakers I need to think on. Expect a further blog post with some of these concepts.

Sitting in Ray Arell's session (@elmoray) on Scrum Must Die.

It is later:
Ray's message is similar to some ideas I've been having of late. People see the learning frameworks as the ONLY way to do things, because that is something related to what their instructor said because even if they are paying close attention. Sadly, many training efforts ignore the principles of Agile and jump immediately to the ceremonies and ritual.

The result is similar to keeping training wheels on bicycles long after they are needed, because that is what "you are supposed to do," according to Ray. Sadly, I've seen many instances where that is the case.

The FIRST way people "experience Agile" becomes the only RIGHT way they know. IF they were not properly trained, or they half paid attention because they were too busy reading emails of doing "important real work" then, yeah. This is what you tend to get.

And this is a huge problem, contributing to commercialization and commoditization of some really powerful ideas. Because we can take anything that seems like a good idea and make snake oil out of it...

Next session, after some lovely conversations in the open space/mentoring space, Dan Billings (@thetestdoctor) is presenting on security roles in testing. Interesting opening (gotta love anything featuring James Doohan... well, William Shatner is there too, I guess...)

Dan's talk was well received (given the number and range of people in the room, pretty much anything with Star Trek references would be well received!)

People caught a great deal of the highlights on twitter, so, here's a link - https://twitter.com/search?f=tweets&vertical=default&q=%40TheTestDoctor%20%23AgileTDUSA&src=typd

My general takeaway, we're not as secure or safe as we like to think we are, nor as we are often told we are. Be aware, build strong diverse teams, explore and follow thread, challenge the comfortable status quo (it likely isn't good enough.)

To mix metaphors (not unlike the question asked "Where's Chebacca?" at the end of the presentation) "Constant Vigilance" - Alister Moody.

Dan's was actually the last session I attended. Instead, I spent some more time sitting in conversation with people, gathering thoughts and preparing to head back home.

I gathered ideas into a collection of notes I will be writing up in another blog post - more on the ideas I encountered than anything else.

The venue for this conference was absolutely beautiful. Having organized conferences, however,I can see where it would be a challenge to coordinate smooth traffic flow and keeping the "feeling" conferences tend to generate.

In spite of this, the organizers and staff did an excellent job of engaging people, making the learning fun and helping people build connections to further their understanding.