SOMEone (ahem) overslept and came flying in to Lean Coffee to find Matt Heusser running it (Thanks, man!) with Rob Lambert & Raimond Sinivee and some 6 others participating.  It was a fantastic conversation!  And like every other Lean Coffee I've been to, the topics and conversation flowed too quickly to track what was happening.

And now I'm after a bit to eat and at least one more coffee - Will be back for the keynote - see you then!

First Keynote for the day - Arto Veldre is presenting on Software Errors as the Founding Pillar of Modern Society.  The opening gambit is that there are myths that each of us fall into easily.  Then slides under "what is Estonian" - mentions 99 stereotypes of Estonians.  He observes that Estonia has one of the most connected society in Europe (yeah - that is true from what I have seen - even the forests in the parks and open space have wifi hotspots - no, I'm not making that up!)

So of all the cool technology things going on - are any of them impervious to problems?  Are they safe from accident? (well, no, that is why we have jobs, right?)  The harder question is are they impervious to intentional, not accidental, harm?  How complex are the systems we have built?

Simply put (his words) "Are these computer systems ready for prime time?" 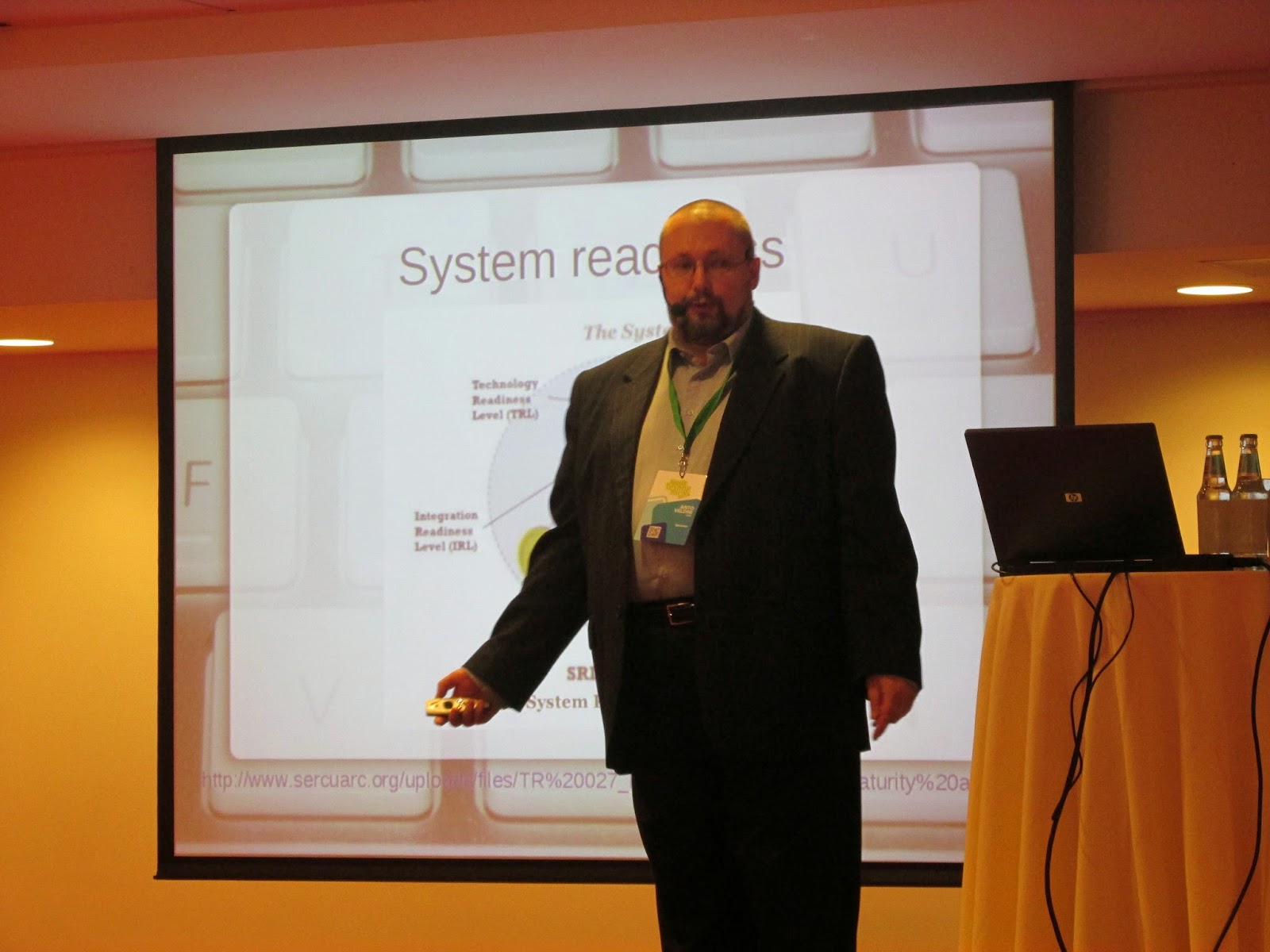 Can we really understand how systems work, let alone their safety from attack - if we don't understand the complexity of the technology under them.  (He had a cool slide showing the landing computer from Apollo 11, along with a binder of source code printed on green-bar paper (flashback to my early career!)

We could understand the code (at one time) and now many systems have become more and more complex - Now - the fragility of systems increases with each additional layer of technology.

He makes an EXCELLENT point around security - "Information security is the only discipline that has laws before the textbooks are published."  (Yeah - that is related to one of the items discussed in Lean Coffee!)

AND after another reference - he brings up self-fulfilling prophecies - and Nicholas Taleb's Black Swan - where we are blind to the situation if we base our understanding only on a limited set of input - for example - the turkey in the US.  Everything looks like things are awesome and will continue to be awesome until Thanksgiving rolls around - then there is nothing to prepare/warm them.

And references the idea that maybe (maybe?) that the problem lies between the keyboard and the monitor.  (Re: Weinberg's all software problems are people problems)

We are wired (biologically and socially) to expect certain things.  These can fall into the realm of bias when we consider what it is that we are trying to understand - and things don't fit.  We will see something that does not fit and we can either "turn away" or reject it as "not real."  Sometimes it may NOT be real - sometimes it is.  Sometimes we can see things and will say "that can not be it" and we'll translate it into something that fits our view.

He runs thru a series of high profile and less well known - the F22 & Chinook aircraft - both had significant software errors - Heartbleed - Apple XSS - etc.,

How did these happen?  What caused them?  More to the point what allowed them to get through and not be detected/found and removed?

Sometimes they may be accidents - then there is stuff that happens that we do not pay attention to, even though we are aware of them at some level.

Why does the Estonian ID card (and other country's for that matter) have a chip embedded in them?  Why do certain "smart TV's" identify and record information about what you are watching - either through cable or broadcast or streamed via the internet?  Do these systems serve a purpose?  Are they really needed?  (reference the NSA)

So, what happens with "big data"?  Who oversees that?  Who guards that and keeps it from improper use?  Who tracks what and why?  How do we know?


OK - he had a stack of slides and ideas - I caught a few of them and that was pretty much it...

Right, so grab another coffee and some fruit and off to a presentation by Raji Bhamadipati.  She's hosting a workshop titled "Where Are the Notes From When You Testing This?" 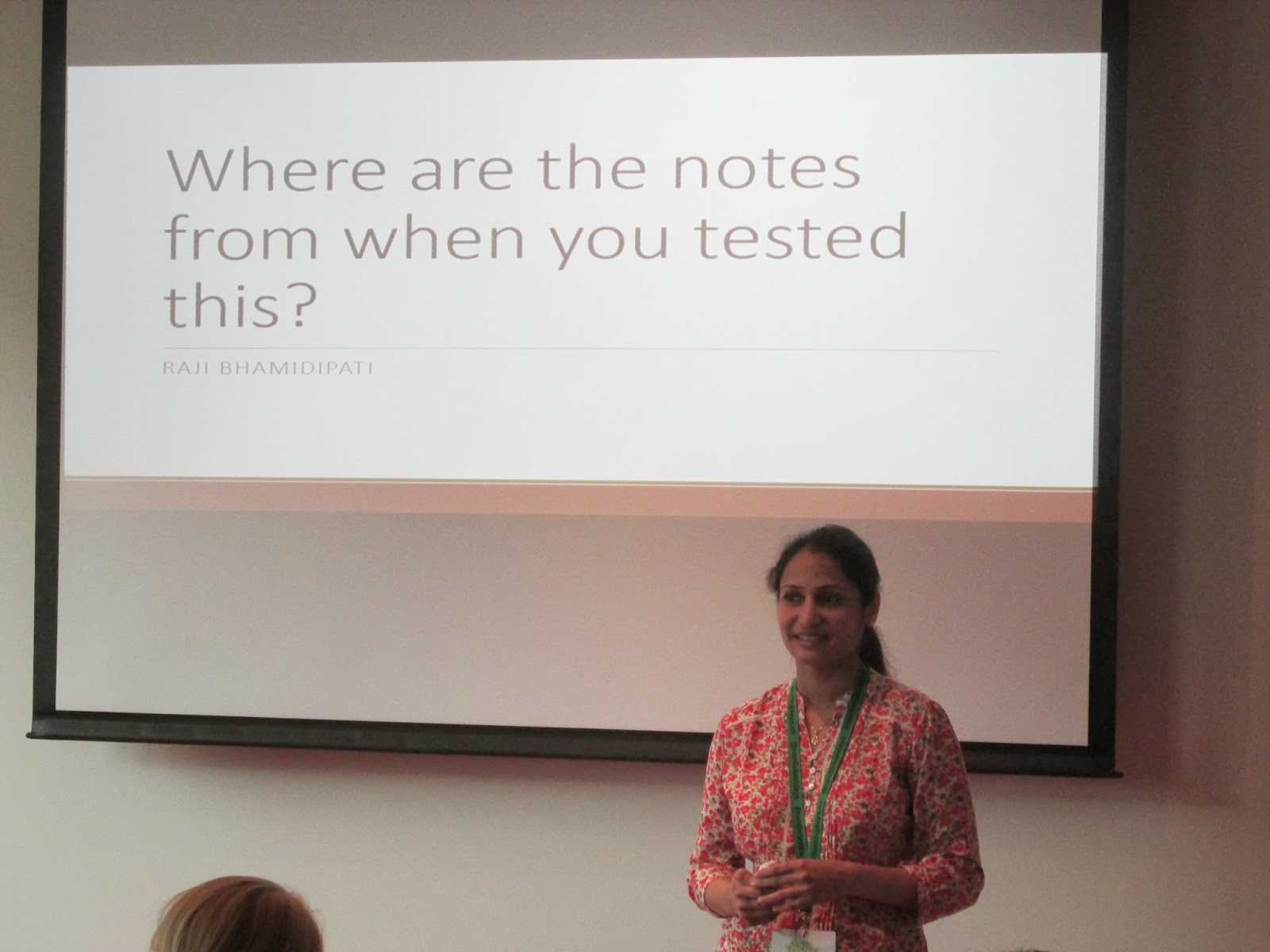 So, the room is absolutely packed (says the guy who is happy he grabbed a spot near a power outlet)  In the room are Bill Mathews, Rob Lambert, Matt Heusser and a stack of other folks.

Some nice slides of people's notes - from Da Vinci's notes from the British Museum, to diaries of British soldiers from WWI, to images of people's notes from different purposes.  The gist is, notes and note taking tend to serve as memory aides for the person taking the notes.  The "If you are not taking notes you are not learning" is referenced, with the caveat that others may take notes differently.

How these are applied to testing gets pulled in - as in a bug is detected by a customer months after the project releases - How do you remember what you saw when testing?  We might have the scripts, we might have bug reports or session reports or something.  But notes do things that may jog our memory.

EXERCISE!  We have post its - so start with notes!  What do we use for note taking?  LOADS of stuff - see? 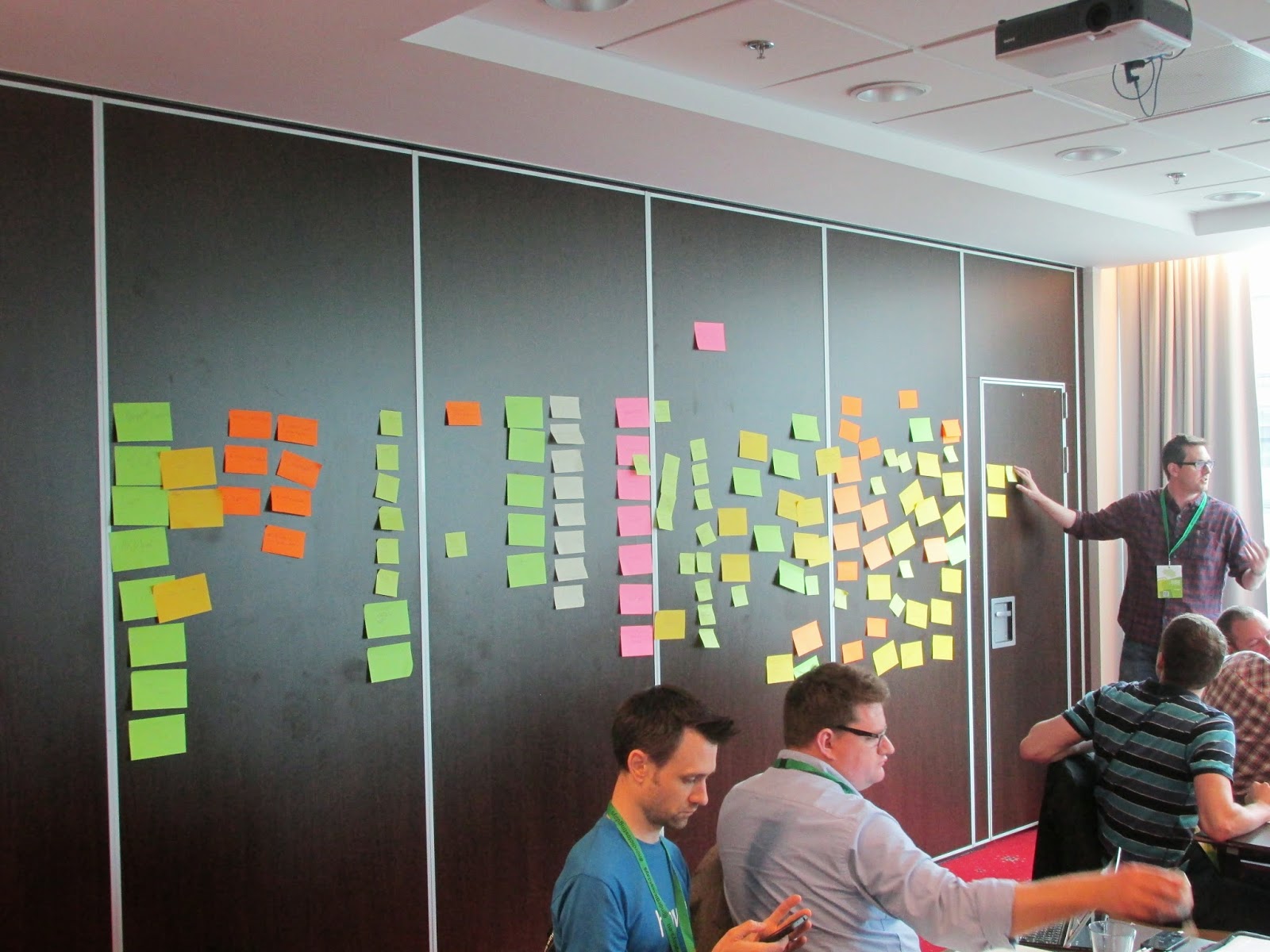 Then there are other options...  We have stuff to do - and now we get an exercise! (another?)

Try it:  http://peppytester.workroomprds.com/ - then select Puzzle 11... and I'm going to try it!

And folks are walking thru what they did - and Dan Billings (yeah, the guy who talked on Security yesterday) decompiled the code.  (snarl,,,)  Fun.

Right - the point is, notes can help us remember and understand.  Any form of note taking has its own perils.

What makes a good set of notes for testing?

If we can't identify what and how we are testing, does what we are doing really count as testing?  Really?

Personal notes may require less formality than notes the boss may want to see.  In any case, there need to be enough information for people (like, you) to understand the point of what you did, how, and what you noticed.

So, how do you know if you are taking good notes?  Try opening them up and seeing what they tell you... say in like, 60 days.
--

OK, so I took much of the afternoon off, relaxed and prepped for my track talk.  Sat with my lovely lady-wife, ran into her while she was heading down to lunch - then chatted with folks - it was really a nice hallway track session - relaxed and easy among presenters who were done and others who (like me) were getting ready to go.

We had some interesting views on the world and what fun was - and what to do.

So, in the end - I chilled - until 3:35 - Then I went in and did the talk on Stepping Up to Leadership: Test Leadership Lessons from Harry Potter.

So, things went on and I worked up a sweat and gave away the last of the candy we brought from the US - And generally had a good time.  Changed my shirt and grabbed a beer (yeah, its Estonia - apparently others were jealous when I walked into the closing Keynote with a beer) and grabbed a seat where I could sit and write and ... keep the beer from getting tipped over. (Priorities)

In listening now to Iris Classon on The Undeniable Value in Curiosity, Collaboration and Contribution.  She describes herself as "The world’s happiest .NET developer & Microsoft C# MVP! More energy than a 5 year old, talks more than your grandmother..."

Ask question, be curious, try stuff - The twitter feed on her  talk (so far) consists of... 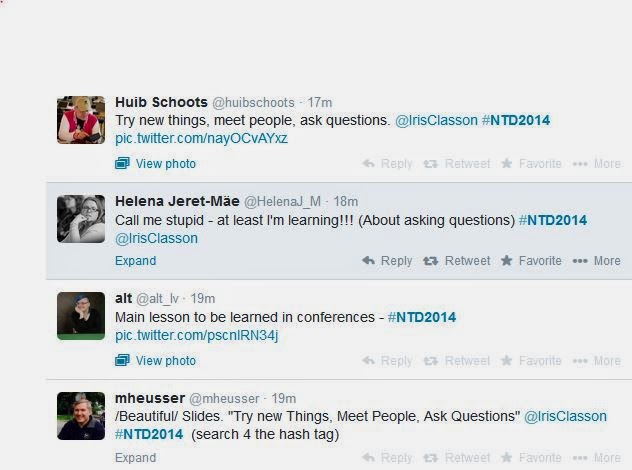 Right - so you get the idea.  And - the thing gets cut short because of tech problems?  I'm not sure.

Anyway - the questions were good - centered around curiosity and generally, they were interesting.  I think Huib Schoots asked the best question "What is curiosity?"

It was a fantastic week - I'm exhausted.