Friday, 17 November came and I realized I had a full night's sleep!

With every intention of attending the "late keynote" and "Women & Allies in Agile" sessions last night, I sat down for quiet time - and woke up at 9:30 PM, and I decided that it meant it was time to go to bed - so I did - and overslept. Missed lean coffee but had a wonderful breakfast chat with David Evans and  Marianne Duijst

Huib & Stuart are announcing the auction of the each sheet of sketchnotes for day's keynotes. Proceeds will go toward the fund me for Linnea Nordström, the 6 year old daughter of Kristoffer Nordström (a fantastic tester and many time speaker here at ATD) -  who is suffering from brain cancer who is going through an experimental cancer treatment that is not covered by insurance. https://www.savinglinnea.com/

**
Roya Mahoob is presenting "Computer Technology as Agent of Change for Women in Developing Countries." Wait, what?  In 2013 she was named as one of the 100 most influential women in the world. I should mention that Roya is involved in leading the Afghan Girls Robotics Team.

In 2010 she formed Afghan Citadel Software - yeah, a female computer entrepreneur -  from Afghanistan. In 2013 she moved to New York because of threats. I should mention that Roya is involved in leading the Afghan Girls Robotics Team.

"Through technology, we are reshaping how entire communities view women."

When she was young, there was an open field across the stret from her house. After the Taliban took over the country, the Taliban gather all the books from the town she lived in that were not Islamic or "approved" in that field and burned them. In her words, her view of the outside world went to ash.

The image of the fire stayed with her and instead of destruction, "The Taliban loved the darkness. Ideas that were not theirs were forbidden." The fire that remained with her though, was the fire of her imagination.

When the first internet cafe opened, her brothers were allowed to go in, girls were not. "I was told that the cafe had this box-machine that connected you to the world."

One day, she made a point of going in very early and was amazed. She saw the computers and saw the world could be opened to her through technology and the internet.

"I believe deep inside all of us is a desire to change the world."

She was asked to arrange/sponsor a Afghan robotics team made up of students to compete at an international robotics competition in Washington DC. There were many applicants for the team, but only 6 who had family permission to travel to the US and had any idea what robotics involved. After being rejected for Visas twice (TWICE!) by the US, until Congressional and White House pressure pushed them through the Visa process - they came and won a silver medal.

They demonstrated that with support and education, even from countries considered non-technology centers, girls have as much potential as any boys. 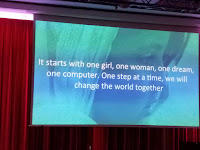 Jose is giving tokens to each of the girls.

Dear Lord - one of them has the guts to address the conference. My heart is breaking at the story. Notes on this later. (Nope - not posting the notes. sorry. )Not just the suffering inflicted in their own country, but their treatment by certain governments (ahem) because of where they were from and their religion. 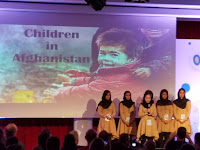 Her father was killed by Daesh for supporting her education and trip to the USA.

And a standing ovation.

OK - I left out that they are building a tech school. I'll post a link to more info when I find it.

I'm a little overwhelmed by this and taking the time to assemble thoughts and clean up blog posts. Sorry, Matt, we'll talk later. 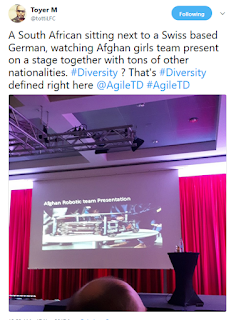 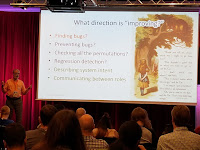 Major point, in BDD & TDD, "I don't write automation to detect bugs, I write them to prevent them." This is a sense that some people expect things from software development to be simple. Yet the point of the 3 Amigos is to help determine not just what was needed, but hwat really was possible.

The point of BDD is to do 3 things - Elicit/discover requirements is part of it the rest? well... 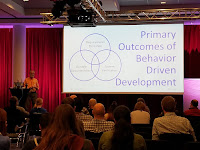 If you start out with THIS - 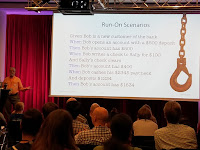 Why not do THIS instead?
Cut it into pieces - and get the result Liz pointed out (ahem) 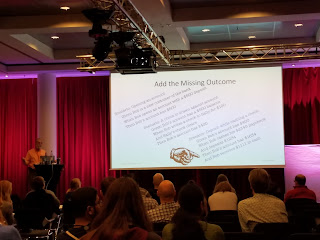 Instead of detailed... stuff - distill to the essence of what you are trying to get to. Because - keep it simple. Don't worry about the UI - Worry that the message is the same - for example - Does the kitchen timer indicate when the time is up? 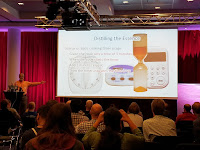 "Every word in a test should be directly relevant to its purpose" - Marick
"Tests should contain every detail that matters, and no detail that doesn't matter." - Emery

"I blame the British (for US companies tendency to not reimburse for alcohol at meals). Australia got the criminals, we got the Puritans. Someone else having fun should not be allowed."

Focus on the rules - focus on the intent - Look at the interesting cases that MIGHT have something of value FOR them. REALLY! 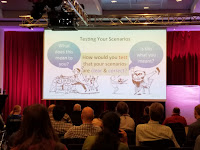 Maaret Pyhajarvi is giving us Leaning with Osmosis.

Maaret won the MIATPP award last year.  She is presenting on some ideas that seem inline with much of this conference. She has been constantly growing and changing herself and how she presents information. She describes herself as a polyglot feedback fairy and a polyglot programmer.

Osmosis is movement through semi-permeable membrane without recognizable amounts of energy being spent.

While in school, she worked very hard to be prepared for class. She was regularly called on in her Swedish class to translate passes from Swedish. While her classmates were amazed that she could translate it, they did not know that she spend a great deal og time preparing to be able to translate the passages.

And then there was this comment -"Women only write comments in code."

Testing is generally a good environment, given the gender balance among the testing community.

Her daughter came to school age. And Mareetp bought her class a book on programming. And - SOMEhow, her friends all liked doing programming - so she tried it to. And she LIKES it. THEN - they tried pair programming - partly because they were doing it naturally.

Then she met Woody Zuill and the idea of mob programming - where 1 person is typing and loads of smart people are working with them. At first, she rather rejected it - because - well - the team did not collaborate. very well. The team rejected the idea - "it's just silly." and other responses. 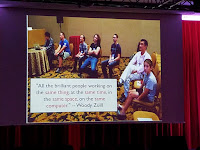 But trying it at meetups and with random people helped.

Finally, she asked a co-worker to try it with her, so she could learn. THey went from typing letter by letter to moving forward fairly freely - she had seen the developers doing things and had a strong sense of what was happening and what developers did on a regular basis, given the situation...

Soon, she found that she could try things and it would be OK. THEN! There was less of yours and mine attitude, and it became an "OURS" attitude.

Then  - the began finding something interesting - Correcting things on the spot, by the mob finding things - removes ego from the environmant. It also helped learn what was relevant. While she slowed them down by inexperience, the slower pace allowed for more thoughtful thinking.AND she was able to do some exploration during these sessions 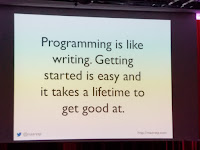 Programming is like writing - Getting started is easy and it takes a lifetime to get good at.

Learning in a mob is a way of moving toward learning things you did not expect ot learn.
Mob techniques can work in testing - ET, Automation, Unit, Perf & Security - which makes perfect send (to me) Mareet explains how she learned about programming from mobbing with her team, and they learned about testing by mobbing with her. 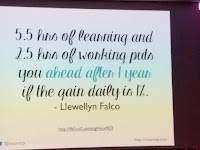 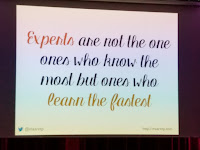 Discomfort can make you learn - the idea that doing something that made you uncomfortable might mean that you can learn something new - or  relearn...

***
OK, a word of apology. My battery was completely flatlined after that last sentence. Shutdown Now. I need to go back and check photos, etc., I missed getting the last of Mareetp's talk - I have some photos and tweet's I'll try and get in place to rebuild it, but...

Big Takeaway from mob programming (and testing) from a former intern brought on full time after a short period of pairing and mobbing: 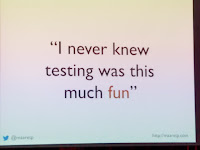 And a BOOK! Leanpub - check it out. 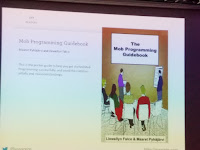 The battery was SO drained, I could not get Janet Gregory's closing talk either. GOOD THING THE PHONE HAD POWER! Someone tweet-stormed her talk! I'll be incorporating that in here later.

**
The FINAL sketchnote page was brought up for auction after Janet's Keynote. All of these are magnificent tributes to the skill of the speakers and the craft the artist Stuart Young- find him on twitter @Stuartliveart. Bidding atarted at 100 Euros and went up, stalling around 250. Until Jose Diaz very gently said into his mic "1000 Euros" - pandemonium wasn't in it.

All in all some 2700 Euros (I saw some figures of 3000+, not sure which is accurate) was raised through Agile Testing Days for #SavingLinnea.

We broke up into groups, some heading home, some to dinner before heading out the next day. Conversation at dinner was long and excited (much to the surprise of other patrons in the restaraunt - maybe that is why they had us in a room by ourselves.
***

In the meantime. I had a number of conversations that last day and evening.Dinner with friends, return to the Dorint to pack up and return to the pub for the farewell drink - the parting glass as it were. 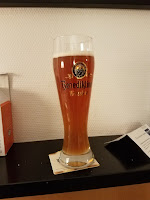 **
I'm sitting in the airport in Dublin at the moment finishing a bottle of porter going over pictures, notes and smiling at the memories. Pulling things together for a recap later in a new blog post.